Phase One of Operation Room Swap is complete.

Our house looks less like a Hoarder Hovel, as the living room is free of all toys!

If you’re just now tuning in, we decided to switch my sewing studio with The Boy’s room.Read about the anxiety-causing endeavor here.

Coming up with a room design was a tough one. The decor from his first room, while pretty gender-neutral, was more on the side of little baby instead of little boy. Not wanting that theme to carry over to the new room, especially the sea-foam green color was the hard part.

But what to do? Anything licensed (e.g., Thomas the Train, Mickey Mouse, etc.) was OUT, as I’m not a fan of pandering to a line of toys or a TV show, end up paying a gazillion dollars to buy ALL THE THINGS in that line, have a super-garish room (seriously, I know the colors match the overall look of the shows/toys, but jeez, could they tone it down a little?!), and then The Boy would immediately grow out of liking that line of toys/TV show, and we’d be stuck with a heinous comforter set for years.

Not in this house.

So back to the room design. The Boy is currently obsessed with trains, and we recently splurged on a gigantic train table as a super-early birthday present (he turns 2 in June), which was taking up valuable room in our living room until yesterday. I was initially thinking a “Trains, Planes, and Automobiles” theme, complete with effing MAGNETIC paint on the walls!

But there were two flaws with this design:

1- The Boy is not old enough to play with Matchbox cars, and his little wooden trains aren’t magnetic on the bottom, and

2- A can of magnetic paint is around $25, which is ridiculous if you’re implementing a small design like this one. Not to mention the time involved with painting the roads on the walls. And we didn’t have that kind of time. Our house was/is in chaos, and this needed to happen STAT.

So back to the drawing board. We came up with the idea of a Timbers-themed room, because it was something The Boy enjoys, and chances are, we’re going to be attending matches regularly for a LONG time. But we weren’t going to splash the Timbers logo or the Timbers Army logo all over his walls, because that would be a little much, not to mention the trademark infringement.

And we’ve had enough oftrademark infringement. Or stealing trademarks for that matter.

So we wanted a subtle nod, something that non-TA people would still enjoy, but may not quite understand why we painted his room that way.

We went with a Rising Sun. Rob and I ended up haggling back and forth regarding the colors, and we both compromised.

I wanted stark white with the green I had chosen, and Rob wanted a lighter green.

I got my green, and Rob got a creamier, almost yellowy-white called “Morning Sun,” which was rather appropriate for the project.

It actually didn’t take too long to paint out; Rob was super quick with taping it off; it was all the goddamn touchup of the doors and trim before and after that took this project forever.

The Boy had the best reaction EVER. He kept saying “WOW!” as he walked all around his new room.

We used the zero-VOC paint from Dutch Boy, and it worked GREAT. We could really tell the difference once we used the glossy trim and door paint (which has VOCs) first to air it out and then used the non-VOC paint afterward, and what a difference it made; we woke up the next morning and didn’t smell any fumes at all (or noticed fumes when we left and re-entered the house after some time, as I know it’s easy to get used to scents when you’re around them for a while). 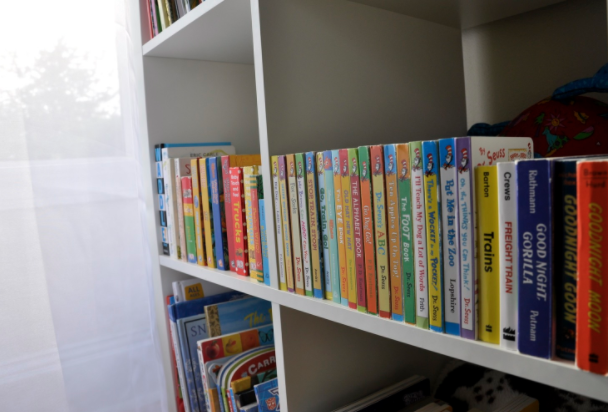 Now onto my new sewing studio, which we’ll begin painting tonight. Chances are I’m going to cry when we paint over the beautiful tree and deer Rob lovingly painted while I was pregnant with The Boy.

And then on to the excitement/anxiety/stress of getting my studio “just right” without having to go out and buy a ton more stuff.

We’ve got plenty of it. Too much, really. I foresee at least two more trips to Goodwill before this whole switcheroo is over.